We all know 2020 has been off-the-charts crazy. Regarding the markets and economy, it’s been one for the record books. In the first half of this year, we’ve witnessed things we might not see ever again!

We’ve comprised 13 charts to prove just how insane this year has been. After reviewing these, I’ll give you some clues to what might be in store for the rest of the year!

Job gains since the Great Recession were wiped out.

When the government forces businesses to close and Americans to stay indoors, people will lose their jobs. This happened in record numbers, as shown by the unemployment rate chart above. Consider this:

Though it might take years for some of these jobs to come back, we are already seeing additional job records being broken. An estimated 7.5 million jobs were added in May and June after the worst of the shutdowns ended.

The economy had its worst quarter EVER.

A good gauge for how the economy is doing is the Gross Domestic Product, or GDP.  Simply put, it’s a way to measure how much our country produced in a given quarter. In the second quarter, the economy shrank at an astounding rate of -32.9%.

Where does this rank compare to previous recessions?

As you can see, this is the worst quarter for our economy in our country’s history. Considering our economy is driven by business, this is no surprise. As our economy opens up, we will likely see a record growth in GDP in the third quarter. The Federal Reserve Bank of Atlanta is currently estimating an increase of over 25%. 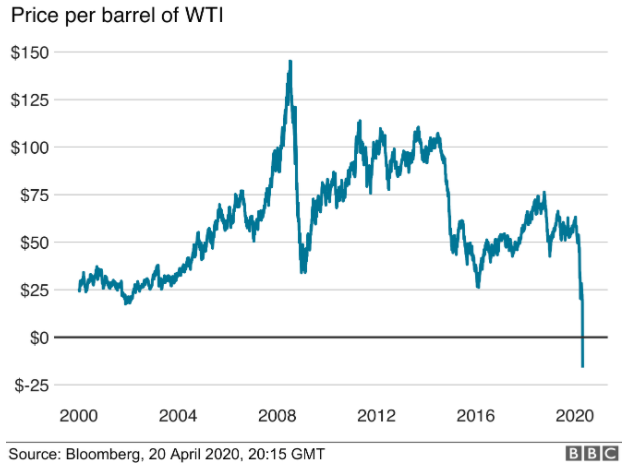 Perhaps one of the stranger events of 2020 was the price of oil. The price of May futures contracts for West Texas Intermediate Crude oil turned negative on April 20th. Without getting into the nuts and bolts of futures trading, this doesn’t mean that gas stations will pay you to fill up your tank. It did, however, show how bizarre this market was.

Why did this occur? For three reasons:

The Federal response has been swift and massive 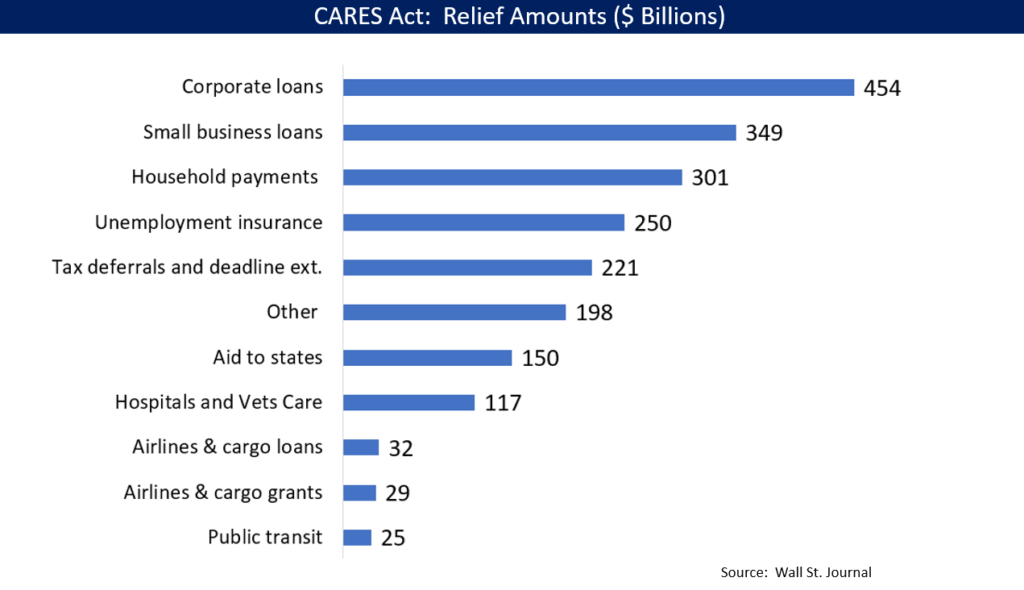 When you think of the government, speed doesn’t come to mind. However, 2020 is no ordinary year. The government’s response has been unprecedented in terms of speed and depth. Think of this–President Trump had his address to the nation from the Oval Office on March 11 where he announced the ban on travel from Europe. This is widely considered the moment when we thought, “Wow, this is real” (the market dropped almost 10% the next day). Only 16 days later, the CARES Act was signed into law.

In total, over $2.4 trillion was spent to keep the economy afloat. While federal spending increased, revenues decreased, adding to the ballooning budget deficit. 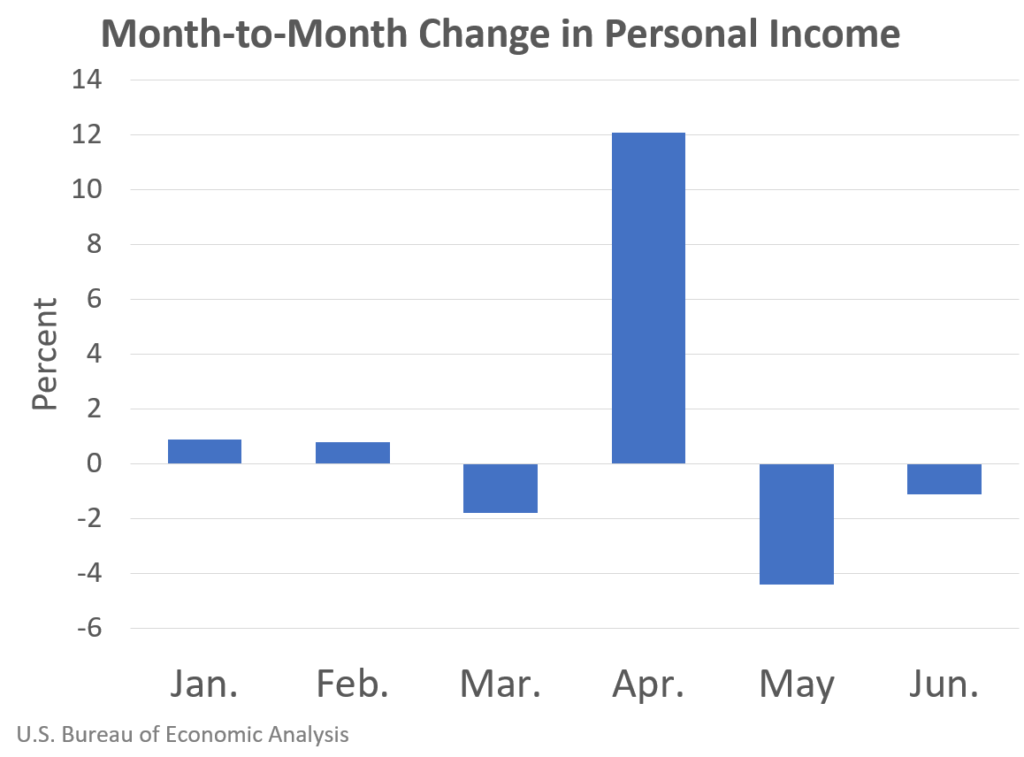 The 10.5% surge in personal income can be attributed to the government’s response through the CARES Act. This includes the stimulus checks and increase in unemployment benefits.

As the Bureau of Economic Analysis points out, personal income can provide clues to future consumer spending.

Personal savings surged during the shutdown

We witnessed some of the worst single-day drops in stocks 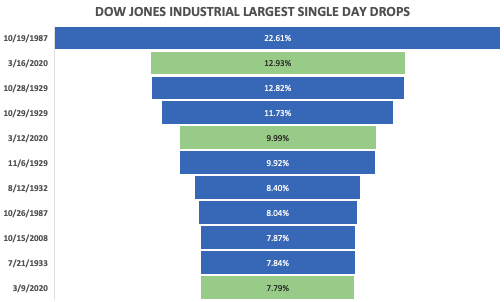 Yikes! You know it’s bad when we are comparing this to Black Monday and the Great Depression.

US Treasury bonds are considered “safe” assets. When stocks go crazy, some investors sell their stocks and buy Treasury bonds. This increase in demand pushes down the yield of these bonds.

What does this mean going forward? For investors, don’t expect to make much of anything from your bond investments. After factoring inflation, your real return will likely be negative for several years.

This was the fastest bear market in history…

On February 19th, the S&P 500 closed at a record high. Sixteen days later, it was in a bear market (defined as a drop of 20%). That’s wild, especially considering it usually takes the S&P 500 on average 286 days to decline this much.

…with an equally stunning recovery

Many sold all of their stocks

Unfortunately, a lot of people missed out on the recovery. According to Fidelity Investments, over 30% of investors aged 65 and older sold all their stocks between February and May.

There is a record amount of cash just sitting there 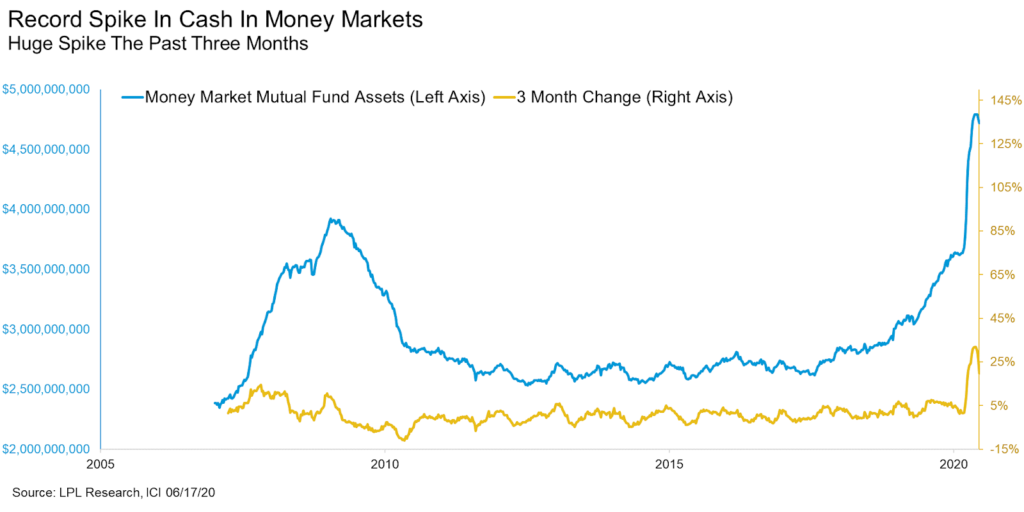 Money must be flowing into stocks now, right? According to LPL Research and the Investment Company Institute, there is a record amount of cash “on the sidelines” in money market funds—nearly $5 trillion of it.

Of all of these charts, I believe this might be the most important for investors asking what’s next. The money supply is the total amount of money in circulation. The good news is all of this stimulus has found its way into the nation’s money supply, spiking 20% since the start of the recession. This is in contrast to the Great Recession when most of the stimulus was kept in bank reserves.

Access to money (liquidity) bodes well for stocks. This also makes an increase in inflation a likely scenario.

From a pandemic to a presidential election, this is certainly an exciting year. If you are a stock investor, it’s natural to wonder what’s around the corner. Since I’m not the one to make predictions, here are a some things to keep in mind heading into the second half of the year:

Stocks would rather have bad news than uncertainty. During the early stages of the pandemic, the uncertainty was palpable. Once the uncertainty was replaced by bad news, stocks started the recovery. Stocks don’t need good news. They just need news that’s not as bad as yesterday. Waiting for an “all-clear” signal isn’t a winning strategy.

There is a ton of money sitting in consumer’s pockets (and credit cards). According to Bloomberg, in addition to the increase in personal savings, consumer credit dropped sharply in the second quarter. They estimate over $1 trillion in combined “dry powder” ready to be spent in the latter part of 2020 and into 2021.

The coronavirus news keeps getting better. Contrary to what the news makes it out to be, life goes on, treatments are getting better, less people are dying, and every pharmaceutical company in the world is hyper-focused on making a vaccine.

The information in our blog is always simple, practical, and relatable. It's professional advice you can trust! We will not spam your inbox. Just quality financial information with wisdom and love.

About the Author: Jake Norton

Jake is a co-founder and investment advisor at Stewardship Financial. In his role he gets to help people make smarter decisions on how to invest their money.